Improve Function and Speed Up Healing 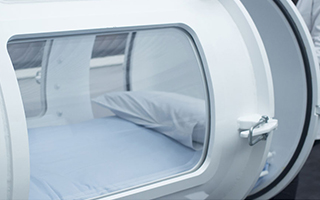 At the start of Hyperbaric oxygen therapy sessions, the patient enters the hyperbaric chamber, which is a large glass chamber. Once inside, a technician slowly increases the pressure as oxygen pumps into the chamber at levels 1.5 – 3 times higher than normal atmospheric air pressure. This fills the lungs with higher than normal levels of oxygen and encourages oxygen to be absorbed into the blood.

Hyperbaric oxygen therapy helps the healing response by enriching the blood with oxygen and allowing for a steady flow of oxygen-rich blood to reach the wound. We offer Hyperbaric Oxygen Therapy in San Francisco.